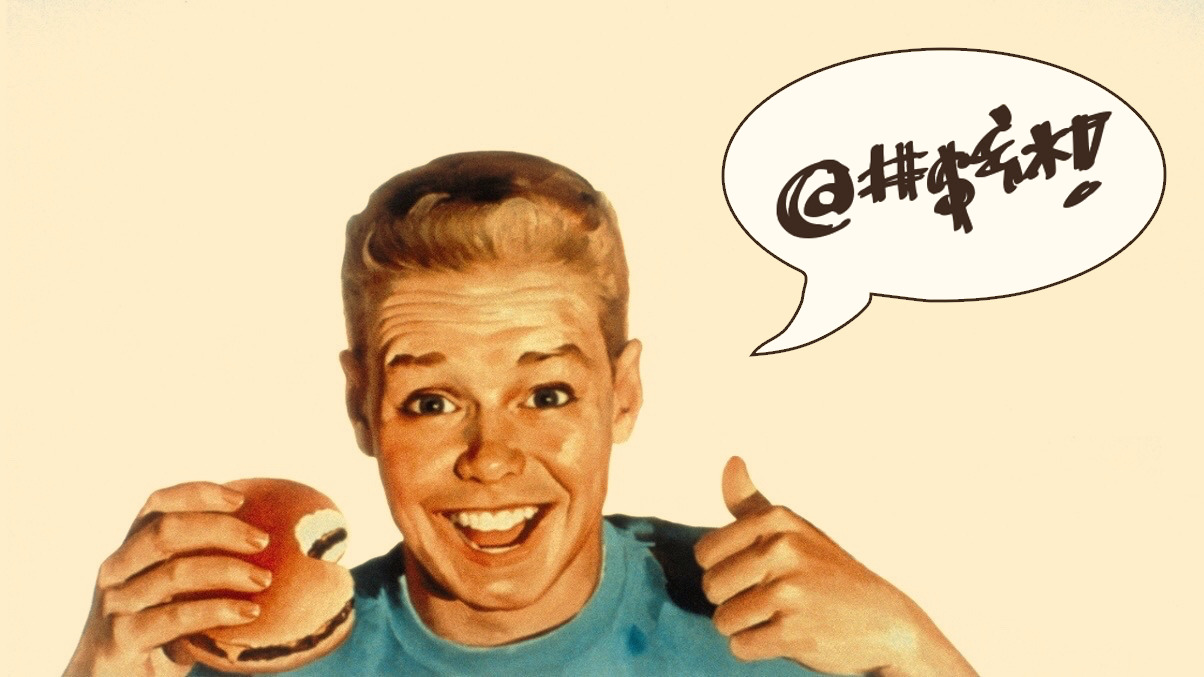 “I’d rather hear a thousand ‘fucks’ than one insincere ‘Jesus.’” We, as Christians, focus too much on the words we do and don’t say. We grow up being taught that cussing is sinful—that somehow random arrangements of letters are an abomination. We are offended when nonbelievers cuss and absolutely appalled when followers of Christ do the same. This condemnation of cussing is one of modern-day Christianity’s greatest hypocrisies. Some will consider me a heretic for writing this blog post, and some will even doubt whether or not I truly am a follower of Christ, but let me assure you—Jesus saved my ass, and I love Him with all my heart.

A main reason Christians claim that cussing is sinful is simply that the Bible “says so.” This couldn’t be more wrong. Cussing is never mentioned a single time in Scripture. Now, I’m sure a few of you are scoffing at me from behind those computer screens, tablets, and smart phones, thinking of Romans 12:14, which says, “bless and do not curse.” But cussing and cursing are not one and the same. Cursing, according to the Catholic Encyclopedia, is “a mere petition that calamity may be visited by God on persons or things in requital for wrongdoing.” In Genesis 3:14, God curses the serpent, but I am sure none of us think that means he told Satan to “fuck off.” In Mark 11:14, Jesus curses the barren fig tree, but I am sure nobody reading this believes that means he walked up to it and said, “You selfish bastard, why do you not have any fruit?” Another Bible verse often referenced in order to condemn the use of cuss words is Colossians 3:8, which says to “rid yourselves of all such things as these: anger, rage, malice, slander, and filthy language from your lips.” That seems pretty cut and dry, right? Even still, this has nothing to do with what we call “cussing.” Though many cuss words originated with filthy meanings ranging from defecation to fornication, meanings change; not only do the definitions of words change over a span of years, but in just a matter of seconds we can change what we mean by those very same words. For instance, a person could be sitting on the beach in the Caribbean, watching the sunset, and just sigh and exclaim, “Damn!” Though the definition of “damn” is to condemn someone to eternal punishment in Hell, this person uses the term to say, “Wow! Isn’t God amazing?”

You see, words are just words; they are sounds we make and are no different from snapping our fingers or clapping our hands. If any word at all were sinful, God would have told us specifically that it were so. For “All Scripture is…profitable for teaching…so that the man of God may be…equipped for every good work.” But never once does God’s Word mention the shunning of specific words; rather, He focuses on our hearts. This is extreme; this means that one person can say with sincerity, “Hell, yeah! I love you so damn much!” and show God’s love, honoring Him, while another person can mumble, “I love you,” when he is harboring hatred or resentment for that person, breaking God’s heart. Our motives, our meanings for the words we say are what matter—the point we are trying to get across—not the vibrations made deep in our throats.

Of course, even after recognizing that words are just tools and are not sinful in and of themselves, followers of Christ still have reservations when it comes to using cuss words. In a Facebook comment debate I have recently been participating in—I know, how cliché of me—my friend lovingly said:

Let me put it this way, in perhaps another way of thinking about the subject of swearing.

Swearing is like the imbibing of alcohol. The Bible directly addresses drinking alcohol. Jesus himself turns water into wine, so how in the world could wine be a sin? Wine is not a sin, just as the swear word is not a sin. Wine is simply a transport for sin. So also is cussing a transport for sin. Does drinking a little bit of alcohol mean you are sinning? Not in the least. Does saying a few swear words mean you are sinning? Not at all. Yes, as you’re saying, the purpose behind the word changes whether it is sinful, just as the purpose behind drinking changes whether that is sinful.

But now think of this - Drinking can lead to sinful actions. A little bit of drinking can cause you to drink more which would cause you to become drunk. So, I would like to state that swearing should be viewed the exact same way as drinking. You can use your swear words as you wish, but that only makes it ever-easier for Satan to take ahold of that action and twist it and turn it into sin. Do you agree that this is true? So, I argue that swearing and drinking are both actions that Christians should avoid completely. If I let myself begin swearing, I know that I will stop viewing the words as actually meaningful and begin using them whenever I wish to and to whomever I wish to, and at that point, we destroy that image of Christ and we sin by leading others AWAY from Christ.

Does that help explain what it is we are talking about at all? I will state it again, swearing is not a sin, but it too easily leads to sin and/or besmudging of Christ’s image. So… With that being said, please answer these questions. Why should we even partake in swearing as Christians? If it can LEAD to sin, then should we not just avoid what society views as cursing and instead use what is acceptable to all?

In a separate piece of the debate, he also gave an example of how refraining from the use of cuss words has helped him to share the Gospel with nonbelievers:

I can’t tell you how many times I’ve gotten strange looks for saying ‘fart ball-buster,’ and not just because that’s a weird phrase. I’ve been asked multiple times, “Why don’t you swear? I dare you to say the f-bomb. Go on, say it! Why won’t you say it?” And to all of these, I can then respond, “Because I don’t believe there’s any reason to say such things. It goes against my beliefs.” From that instant, from simply not swearing, I have opened doors.

“If it can LEAD to sin, then should we not just avoid [it]?” I have two separate responses I could give to this question.

My first response is as follows:
This is quite an honorable lifestyle that my friend proposes. Any follower of Christ who avoids what can LEAD to sin surely deserves some respect. I understand what he is saying—that it is WISE to stay away from what COULD “cause you to stumble.” This is pulled directly from Scripture, from the Sermon on the Mount (Matthew 5:29-30). However, if one is to fully follow this passage, it applies to so much more than just words that can be offensive. This passage is radical, extreme. In a world where every single thing is plagued with sin, in order to avoid all that could LEAD to sin, it follows logically that one must avoid nearly everything. So allow me to explain: If you avoid certain words because using them could LEAD to sin, you also should avoid watching movies, listening to music, reading books, etc. that use those words, as they undoubtedly influence your attitude and skew your heart and mind at least a little bit and LEAD to sin; any movie, television show, or any form of entertainment that features immodest women or sexual content or violence should be avoided, because watching them could LEAD to sins such as lust, violent behavior, etc. If one lives this radical amputation lifestyle, he should avoid contact with people who condone any sort of these sinful things, as they also undoubtedly influence his attitude and skew his heart and mind at least a little bit and LEAD to sin. There are people who truly do seek to live this lifestyle, however impossible it may sound to fulfill such a goal; they are called monks, nuns, and hermits. They live away from all the various things that could LEAD to sin in order to remain pure like their Father has commanded of them. However, God commands us also (as seen in Romans 12) to be “in the world, not of the world” meaning that avoiding the world and moving away and secluding ourselves like monks, nuns, and hermits is actually sinful. With this in mind, when one then looks back to the passage in Matthew 5 that speaks of removing from you what “causes you to stumble,” it is not referring to every single thing that COULD influence you, but every single thing that DOES influence you. So allow me to explain: Though you can not get drunk (which is sinful) without drinking (which is not sinful), you do not need to avoid drinking in order to not become drunk if you personally do not struggle with drinking too much. Now, if a follower of Christ used to be a drunk and knows he struggles with controlling how much he drinks, then HE should avoid drinking. We all are different, with different desires and different struggles. This passage is not a general one, but a personal one—we should avoid what causes US personally to sin. To be “in the world, not of the world” is to live responsibly, avoiding what may cause us personally to sin and using what does not in a manner that is purposeful and thus gives glory to a purposeful God. In addition, however, to considering what causes us personally to stumble in sin, God commands us in Philippians to not cause our brothers in Christ to stumble either—if you can drink reasonably, but you know your friend struggles with drinking too much, then you should refrain from drinking around him. In regards to cuss words, this means that if saying them does not personally lead you into sin, but your friend struggles with saying kind things to others, you should not use them around him; while if you are with a friend who, like you, also does not struggle with his words, it is not only not sinful to use them in a purposeful manner around him, but it also even glorifies God in showing how those words which can be used for evil are redeemed and used for good.

My second response is as follows:
Just as in how my friend has been able to witness to nonbelievers because they ask him why he does not say certain words, I also have been able to witness to nonbelievers because they see me as not being “holier than thou” and as being down-to-earth when I say certain words. Words are words, and they can be used to tear down, but they also can be used to build up. Once again, in my experience, I have been able to imitate and thus glorify God by redeeming certain words and using them to build bridges with which to show His love with those with hearts hardened toward legalistic Jesus-lovers.

In summation, it is not sinful to say cuss words; however, there are many factors in determining whether or not you should say them. We all have different beliefs and a wide range of convictions; what is centrally important is to place your focus—both in refraining from and in using cuss words and in every other disagreement among followers of Christ—on glorifying God, building His kingdom, immitating Him.